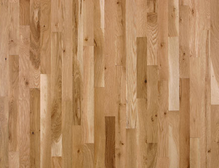 Example of oak flooring showing both darker heartwood and lighter sap wood characteristics.
.01 Heartwood: Heartwood is the older, harder central portion of a tree. It usually contains deposits of various materials that frequently give it a darker colour than sapwood. It is denser, less permeable, and more durable than the surrounding sapwood.

.02 Sapwood: Sapwood is the softer, younger outer portion of a tree that lies between the cambium (formative layer just under the bark) and the heartwood. It is more permeable, less durable, and usually lighter in colour than the heartwood.

.03 The relative amounts of heartwood and sapwood in a flooring batch may affect the way it accepts stain and finish and, therefore, the finished appearance of the floor. In general, quarter-sawn and rift-sawn flooring which contain less sapwood than plain-sawn flooring, and will tend to have a straighter grain and more uniform appearance. Heartwood is also more dimensionally stable than sapwood, so flooring with a high percentage of heartwood will shrink and swell less than flooring that is mostly sapwood.